The Real Truth About Autism is in the Arithmetic

In response to the recent opinions expressed in the editorial pages of the San Francisco Chronicle (Sunday, 8 July 2007), I would say that both authors left out some major issues that deserve additional comment. As a board-certified psychiatrist and participant in the Autism Research Institute Defeat Autism Now program, I have had sufficient experience to recognize the huge gaps in the discussion.

First, there is an epidemic of autism. No one can deny that there has been a severe increase in the numbers of children who are injured in the neonatal period, leaving them with gross developmental neurological deficits, such as language delay, impaired comprehension, disturbed social behavior and learning disability. These children are unable to cope with the demands of modern life and unable to win at the competition of modern society.

The increase in such cases since 1987 is about 50-fold and the upward trend coincides with a three-fold increase in mercury exposure from the new public health vaccine programs implemented since 1989. For example, in 1987 the mercury burden from eight injected vaccines was about 200mcg total. By 2001, before Governor Schwarzenegger ordered removal of thimerosal from children’s vaccines in California, the vaccine schedule was increased to 23 injections, which contained about 575mcg of mercury from thimerosal used as a preservative and adjuvant in the vaccines. In 2007 the vaccine schedule was increased to 36 shots. Strangely, this increase in vaccines, most containing thimerosal, a mercury containing preservative, comes when the EPA has halved the adult toxic threshold for mercury from 13 mcg to six mcg per day. This is in line with the current view that there is no safe level of mercury in children.

Karara Barber’s essay on Aspergers was very practical because it addressed the types of educational and skills therapies that are proving to be so very helpful in improving the lives of those more fortunate, higher functioning individuals with developmental brain injuries classified as “Asperger’s Syndrome” or “high functioning autism spectrum disorder.” And it is important to recognize the value of these therapies.

However, the core disability at the higher level of function in Asperger’s children is the impairment of comprehension, the variable degree of lack of capacity to understand situations and behave appropriately. These children lack common sense and they grow up to be adults who lack common sense. Of course, most of us lack common sense now and then, but Asperger’s victims display unreliable social and intellectual judgment to a disabling or dangerous degree. They are often impulsive, dependent and may be vulnerable to being manipulated by others. Some of these brain-injured people are capable of superior performance in specific tasks: music, art, mathematics and cataloging. Some of them are able to find their place as artisans and teachers. But their performance hinges more on rote than on adaptive thinking, i.e. appropriate to context of the moment. That is the main reason why Asperger’s is identifiable and stigmatizing: such people are strange or even weird from time to time but with enough individuality so that the rest of us can accept them as only ‘eccentric.’

Non-professionals seldom recognize the underlying neuro-developmental injury. And this injury is not easy to recognize or it would have been addressed by Dr. Rahul K. Parikh in his compassionate but condescending editorial (http://www.sfgate.com/opinion/article/THE-TRUTH-ABOUT-AUTISM-Amid-cries-of-an-2555757.php). He refers to “a broad spectrum of language, social and behavioral problems” and he acknowledges a 3 to 10 fold increase in autism in less than 20 years, but then denies that this represents an epidemic! If you go back to Dr. Leo Kanner’s initial publication in 1943, introducing the word “infantile autism, there were only 11 cases in the entire world literature! And that was a kind of mini-epidemic. Retrospective analysis of these cases now points to mercury linked to occupational exposure of parents employed by a paper manufacturing plant in the community where Dr. Kanner’s autistic patients lived.

The work of Dr. Bernard Rimland, founder of Autism Research Institute 40 years ago and the Defeat Autism Now working group in 1994, has championed our understanding of biological, nutritional and toxic factors in autism since his ground-breaking book on autism in 1962.

He organized the DAN ‘think tank’ conferences in 1994 to generate inter-disciplinary thinking in the face of what was already a disastrous epidemic of autism spectrum disorders since about 1990. At the initial meeting of DAN in 1994, I was asked to present the orthomolecular view, which then centered on arguments for and against deficiencies in omega-3 fatty acids and vitamin A as causes of autism, as well as acknowledging the neurotoxic effects of increased fluoridation. I did not suspect mercury toxicity at that time because the Environmental Protection Agency was already on high alert after the mass poisoning at Minamata, Japan, in which hundreds of babies were brain damaged in utero and many were born blind, deformed and mentally retarded. It was also observed that the mothers showed only minor symptoms. We were further lulled into a false sense of security because mercury was legally banned from indoor paint in the United States in 1992. It seemed to have already been recognized and dealt with--a non-problem by 1994. I believed in our experts after all this recent experience.

And that is all the more reason to listen to the parents and families now. It was a parent of an autistic child who raised the issue of a link between mercury and autism. It took a parent to do the arithmetic, to translate micromoles of mercury on the vaccine labels into micrograms of mercury, the language of the Environmental Protection Agency. At 25mcg of mercury from thimerosal preservative in each shot, multiplied by 23 shots, the total mercury exposure adds up to 575mcg, an amount that exceeds the EPA toxic limit for adults! And that level is conservative, since it assumes that the quantity of thimerosal is carefully measured and tightly controlled, which it evidently is not since the frequency of adverse reactions varies considerably from batch to batch!

About the same time, Dr. Rimland learned of the work of two outstanding research scientists. Jill James, Ph.D. professor of biochemistry at University of Arkansas, and Richard Deth, Ph.D., professor of pharmacology at Norheastern University. Their research simultaneously but independently identified mercury as the most potent toxic agent against a vital enzyme, methionione synthase, which is especially important because it is gate-keeper for the production of SAM s-adenosyl-methionine), the obligate agent of a remarkably important metabolic pathway, methylation. Among the 400 vital products of this pathway are phospholipids that make up nerve cell membranes, hence providing 70% of the dry weight of the brain; and myelin, the coating of nerves, which is absolutely required to protect growing nerve tracts so they can grow into their receptors and thus complete the new circuits of the developing brain, a process that is only 90% complete at age 3 years. This leaves the developing brain vulnerable for a long time, probably past age ten years.

And finally, methylation is directly essential to production and balancing of neurotransmitters, such as acetylcholine, dopamine, nor-epinephrine, epinephrine, and melatonin, and indirectly essential for serotonin as well. Thus, anything that blocks methionine synthase enzyme also blocks methylation and disrupts the chemical substrate for the foregoing essential processes. Mercury is at the head of the list of agents that bind to the enzyme, thus disrupting its function. However, Aluminum is second to mercury in this regard, and taken together the two metals have a toxic synergism, causing more damage than either by itself.

Bottom line: there is no question that mercury toxicity is highly suspect for the dramatic increase in children with developmental brain injury manifesting as neonatal autism, childhood ADD and Asperger’s and adolescent behavioral disorder, depression and violence, all of which have shown increases. It is possible that an even worse epidemic is yet to come due to the undiagnosed injuries suffered by millions of the rest of our children.  Ask any school teacher over age 50 and you will hear about the declining performance of our school-age children. The educational crisis is not necessarily due to immigration and acculturation and language problems but due to widespread and unexplained learning disorder in our children. It is disturbing to consider the serious possibility that the next ten years may present America with a crisis as millions of our young people prove unable to cope with the emotional, intellectual and behavioral requirements for success in our competitive and demanding civilization. Who will run and repair all that equipment!?

Finally, let me address Dr. Parikh’s ending statement, that if lawyers against vaccines succeed, it’s a victory whose only result will be more childhood morbidity and mortality. He is wrong. Consider this: it is a proven fact that we can prevent death from measles simply by assuring adequacy of vitamin A. That much has been proven; and probably other nutrients and treatments offer additional protection for all the communicable diseases. Vaccines do not prevent them all either. But if there were no vaccination, it is possible to treat pertussis and even tetanus successfully with antibiotics.

This is not meant to give false hope but it is a fact that many autistic children improve with educational therapy, behavior therapy, and orthomolecular support, especially HydroxyCobalamin and short-term use of methylcobalamin in injectable form, which restores activity of methionine synthase and methylation. Pyridoxine and magnesium, have been proved by peer-reviewed, double blind studies to offer effective therapy for autism, though even after such improvement most victims continue to exhibit spotty comprehension, slow thinking, and social awkwardness that is evident to the family and teachers. The joy of it is that many autistic children do recover language, intelligence, and social grace and acceptance by their peer group.

The point is that nowadays, well-cared-for children do not often die from the so-called childhood diseases.  But once the brain development has been corrupted, and the child has lost speech, eye contact, comprehension, ability to play and interact socially, and has given way to repetitious, stereotyped behaviors, and tantrums, what is left? Is that not like the loss of the child? That’s the way parents often feel. And when the lucky children who respond to various therapies, including chelation therapy, which helps to remove mercury and aluminum from the body, the parents often exclaim: “I have my child back.”

P.S. Mumps and rubella are not likely fatal—but more important they are not common in the neonatal period. Hepatitis B vaccine is especially unlikely to serve a necessary purpose in newborn babies, yet it is a live virus with neurotoxic properties in addition to the added toxicity of mercury and aluminum. The Japanese have long since chosen to delay these high risk vaccines until age 24 months, so as to minimize neuro-developmental damage. Compare that choice to the unhappy fate of the 35,000 California youngsters in the graph that clearly shows a 7-fold rise in number of autistic children in California between 1993 and 2006. And if the graph went back to 1987 when there were under 500 such new cases in the State, the actual rise has been at least 50-fold. That, I am sorry to say, is a real epidemic. And it correlates with the increased mercury burden mandated by the well-meaning but unbelieving health authorities at WHO, CDC, NIH and every participating public health department in the country. Remember, it took one concerned parent to do the arithmetic! 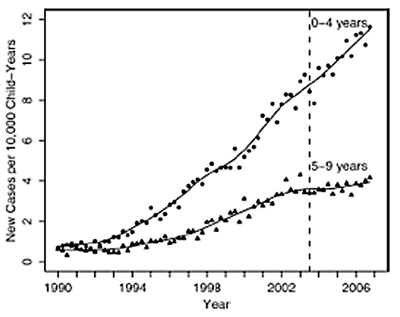 Ola Loa makes me feel so great and gives me so much energy that I look forward to taking it everyday.

I would recommend Ola Loa Cran-Rasberry ENERGY to anyone and everyone that lacks energy, especially all seniors!